In a previous article I mentioned filtration. It was the first part of a small excursion into the world of compressed air preparation... Today, we will move on to the second stage of our trip: regulation.

Even if basically, like the rest in compressed air, this principle is not very complicated, the fact remains that it is difficult to explain. So, I'm going to work on it, hoping that on arrival you know a little more than at the start. Come on! Fasten your seatbelts, it’s going to be a bumpy ride!

How does a regulator work?

I see you coming! I already hear some saying: "My compressor displays 100 and a few psi at the output! it's good like that! Upon closer inspection, even if the initial pressure has been pre-set to compression, reading a pressure gauge will clearly show irregular and permanent variations in psi (pounds per square inch). These small mood swings of the pressure level obviously require correction to keep it in perfect regularity and to ensure the best supply of air to the tool whatever it is. The most common principle is the use of a membrane regulator. To put it simply, the air passes through the regulator through an airlock whose exit door (the valve) will open, to varying degrees, depending on whether the pressure will be too much or not strong enough. This valve is controlled by said membrane (an axis connects them vertically). When you chose a pressure adapted to your tool, you acted on an adjustment button located on the head of your regulator. By turning it in one direction or the other, you have compressed or relaxed an internal spring (the control spring) which pushes directly on the membrane at the chosen pressure (see the needle on the pressure gauge). This membrane forms the ceiling of a small chamber located above the passage through which the air flows. A very small hole (recovery passage) allows, from the passage and just before the exit of the regulator, compressed air to enter or leave this chamber. If I have set my pressure to 90 psi and the air coming out of the compressor is at 92 psi, then a small part of this air will enter the chamber and push the membrane upwards (which it is adjusted to 90... So, 92 against 90... The membrane lifts!). As a result, the valve that is connected to it (by a small axis) will go up a little and therefore slow down the flow of air. As a result, the pressure at the outlet of the regulator will fall. The system works in both directions (too much pressure or not enough) and the membrane (also sometimes called diaphragm) will suck up the excess pressure or push the overpressure from the chamber to the main passage. But we must understand that all this is happening at a very high speed! The diaphragm works a bit like the wings of the hummingbird, the little bird whose wings are not distinguishable because they beat so fast! The faster the diaphragm vibrates, the more linear the regulation will be. Drawings being clearer than long descriptions you will see below a regulator cut that will help you. 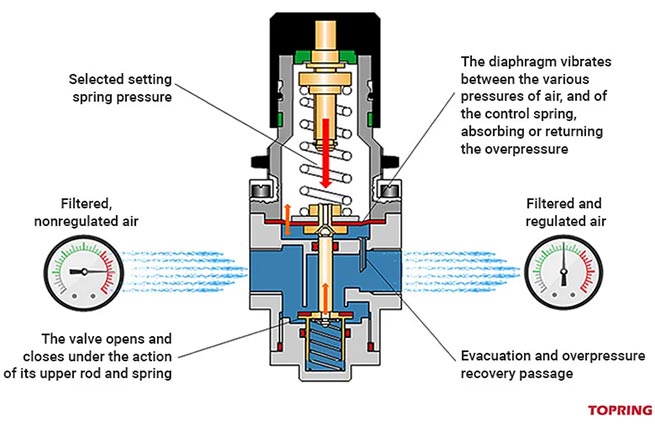 Why do we need to regulate the air?

There are several reasons that confirm the need for perfect regulation. One of which is the protection of the mechanism of the tool that we will connect to the line. Manufacturers always design their motors with a pressure from which all the strength calculations of the different parts will be derived. So, it is important if you want to preserve your machines, and your wallet, to stick to what is recommended. Often, for the most common tools, a pressure of 90 psi is required. Thus, going beyond 100 psi would be like going into overdrive... Beware of breakage!

Another good reason is related to the result. A very interesting, and easy, little experiment demonstrates this clearly. To do so, drill two holes in a piece of metal. Let me explain; you take a pneumatic drill and a new drill bit. Start a stopwatch the very moment the tip touches the metal, and you stop it the moment it comes out on the other side. You repeat the operation a second time under the exact same conditions, the only difference being that you will have modified the pressure of your compressed air by 7 or 8 psi. The result is obvious as you will notice a difference of several seconds for the same work! You will tell me that for drilling a hole, it is not very serious ... Of course not! But for thousands of holes, it's more annoying! Imagine your name is Coco Colo and you make millions of cans of soft drink. If the production line loses a second per box, it is hours of production lost and hundreds or even thousands of cans less... Ouch!

I also see a third good reason: Leaks! As everyone knows, there are always leaks in the air network. It’s true, more or less, but still! Regulating at the head of the network will limit the volume of these leaks. Often it is considered wise to choose a pressure slightly higher than the needs on the main line, up to the air point of use of each of the workstations. For example, you can stay at 100 psi on the network and go to 90 psi at the workstation (but this is just one example).

Finally, some types of work impose a very different regulation from other applications. Examples include painting, varnishing, blowing, breathing air etc. In these types of applications not regulating would certainly mean at best, a complete failure, at worst a catastrophic accident.

Where to install the regulator?

In fact, that's a good thing! Regarding the location of the regulators, we follow the same rule as for filtration... Namely, as close as possible to the workstation. This is to avoid a possible pressure drop during the distance between the regulator and the machine... Sometimes there are cases where the work is carried out outside the workshop (for example, some interventions on heavyweight vehicles are done in the garage yard. In this case, we will probably be far from the air point of use ... The solution will then be, as for filtration, to use a portable regulator to connect the tool as closely as possible. The regulator can also be attached to the tool trolley which will have the same result.

That said, as explained above, head-of-grid regulation will be recommended as soon as the compressor is released. This will regulate the air in two stages, which is better for the general operation of the entire network.

Two or three things for the road!

The regulator is a rather fragile reading instrument. Always remember to place it where vibrations are not likely to disturb it.

In the same vein, the regulator, because of its sensitivity, does not like impurities that are highly likely to degrade its mechanism. To protect it, it must always be placed after a filter. Thus, the air that will enter our regulator will be clean and therefore, perfect for a good adjustment. The regulator is, so to speak, the first machine to install after the filter!

Always check the proper functioning of the pressure gauge (the dial with the pointer) because if it did not work you would be struggling to properly regulate your network ... Keep an eye out!

When you adjust your pressure before using your tool, you will probably find that there is a difference between the pressure indicated on the pressure gauge at a standstill and that which is displayed during the use of the machine. If you then wonder where the right fit is, know that the pressure always adjusts itself when the tool is not in use. When the machine is at rest we are dealing with a so-called "static" pressure, and when it is in use (the needle panics) dynamic pressure is displayed. When a manufacturer recommends a pressure of (for example) 90 psi, he always speaks of the static pressure (so when the tool is not in use).

If you work in a field such as painting, or an equivalent, be careful to install a pressure gauge with a glass window on your regulator! It happens very often that a veil of paint comes to cover this window and then, woe to you if you get the idea of cleaning it with a solvent ... and that the window is made of plastic... No more reading! The screen will become opaque! Hence the choice of glass!

In terms of air preparation, we always talk about the famous FRL (filter, regulator, and lubricator). These three letters appear in a precise order of work: We filter first, then we regulate, and finally we lubricate ... Next time I will tell you about this last step...

Originally from Britain, Daniel Launay is a “retired’ professional who now has all the freedom in the world to do the projects his is passionate about! Daniel was an Export Manager for 37 years for Prevost in France, a company specializing in the connection, air treatment and transport of compressed air. During his career, he was in charge of export development and training sales teams. He has a solid experience in the field of compressed air.