Northeastern Alberta is an integral part of one of the largest boreal forest ecosystems on the planet – a wilderness that covers nearly half the province. Here, several rivers flow from the Rocky Mountains into the watershed of the Arctic Ocean, including the mighty Athabasca River, upon whose frozen waters Indigenous Elders remember herds of woodland caribou once travelling.

Today, caribou sightings are rare, part of stories passed down through generations of Indigenous Peoples who call this region home. The cumulative impacts of oil and gas, mining and forestry have fragmented or destroyed caribou habitat and increased access for predators. In spite of decades of recovery efforts, the situation remains dire: caribou populations across Alberta are declining.

“We’re well past life support,” says Carolyn Campbell, conservation director with the Alberta Wilderness Association. “We don't have the right to cause Alberta caribou to go locally extinct within the span of one lifetime.”

But with its overlapping forestry tenures and oil and gas leases , northeastern Alberta is arguably the hardest place within Canada’s boreal to implement caribou conservation measures.

Despite all this, there is newfound hope for these caribou populations, thanks to the ongoing work of committed partners willing to do what’s needed to conserve or restore caribou habitat in the boreal landscape. A promising suite of collaborations are underway between industry leader Alberta-Pacific Forest Industries Inc. (Al-Pac), energy sector members of the Regional Industry Caribou Collaboration, collaborators of the Alberta Regional Caribou Knowledge Partnership, the Alberta government, environmental groups such as Alberta Wilderness Association (AWA), Ducks Unlimited Canada and Canadian Parks and Wilderness Society (CPAWS), and First Nations including Fort McKay, Cold Lake, Chipewyan Prairie, Heart Lake, Mikisew Cree, Athabasca Chipewyan and others.

Central to this effort are FSC Canada’s caribou requirements, part of the new National Forest Stewardship Standard that supports the 2012 Federal Recovery Strategy for boreal woodland caribou developed under the Species at Risk Act. FSC will not certify any company unless specific caribou conservation requirements are met. This means forest managers must set woodland caribou habitat management strategies based on the best available science and risk assessment/mitigation tools. This includes minimizing the building of roads, harvesting outside caribou breeding season, and minimizing landscape disturbances by aligning forestry efforts to nearby industrial activities.

To meet the FSC standard, Al-Pac sought new ways to reduce human footprint. To that end, the company strategically sequences and defers harvest areas, chooses areas to harvest with little or no current caribou and, importantly, collaborates on caribou habitat restoration efforts.

“The best time to implement caribou conservation measures was 10 years ago and the next best time is now,” says Elston Dzus, Al-Pac forest ecologist. “We cannot wait any longer.”

Cliff Wallis, director at AWA, has even employed the FSC standard in areas without certification and found that it serves as a tool to clearly demonstrate a path forward.

“FSC shows industry that you can actually operate on a wide landscape while also protecting the rights of Indigenous Peoples and keeping caribou on that landscape,” Wallis says. “The standard gives something to aspire to, helping companies recognize that past methods of forest management aren’t enough.” 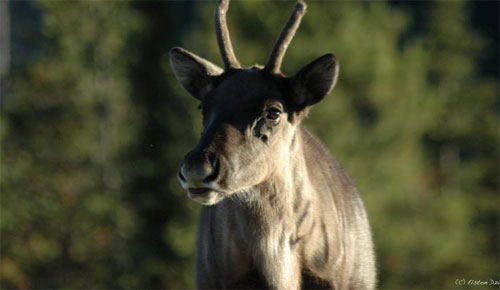 The Forest Management Agreement (FMA) area on which Al-Pac operates is home to six herds of caribou, all of which are deemed at risk. In order to prioritize caribou habitat conservation, Al-Pac knew they needed to bring diverse perspectives to the table from involved land users. For example, for the Red Earth caribou range, it embraced historical insights from local Indigenous communities in guiding restoration plans for three key areas.

“Al-Pac will send a crew out for weeks to walk the land and understand ecology and wildlife, to view what a cut block looks like before they plan a harvest,” says Ryan Abel from Fort McKay First Nation, who says that Al-Pac has partnered with his community for over a decade toward sustainable development. “This is an impressive commitment you don’t see very often from industry.”

What’s more is that Al-Pac has supported other forestry and energy companies in the region to join them on this mission.
“Caribou conservation is a cumulative effects issue and so requires cumulative effects solutions,” says Elston Dzus of Al-Pac. “Collaboration is critical to advancing meaningful conservation measures.” Gillian Chow-Fraser, Boreal Program Manager at CPAWS Northern Alberta, says that planning with l-Pac carries the spirit of collaboration, rather than straight negotiation, which has built a necessary foundation of trust.

“They are a major industry player that trusts the science, is very solutions-oriented and, because they are committed to the high FSC standards for caribou, we can make substantial progress rather than lose momentum – like we do with less engaged forestry operations,” Chow-Fraser says. 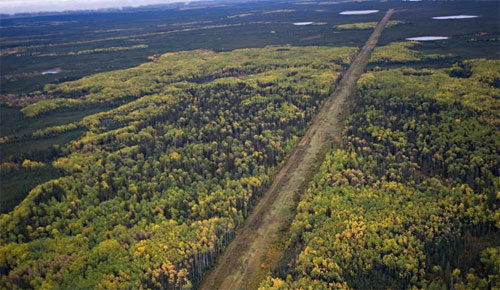 Together, the collaborating parties are coming up with creative solutions to restore caribou habitat in northeastern Alberta. Core to the strategy is to continue a decade’s long work with Indigenous groups and strike new efforts with other industries – particularly energy – to restore thousands of kilometres of legacy seismic lines across the region.

Seismic lines are linear features in forests where trees were historically bulldozed to allow primarily oil and gas companies to explore natural resource potential on the land. The resulting impact has degraded the landscape and enabled predators, most notably wolves, to have far easier access to already-threatened caribou. In fact, wolves are believed to be the main cause of woodland caribou deaths – and can boost their hunting speed by up to 300 per cent down seismic lines that have been created over the decades.

Restoring habitat begins with planting trees and returning forests back to their original states – and
Al-Pac has already begun this work, with members of the Regional Industry Caribou Collaboration on board. Even early growth of one metre of shrubs or trees can dramatically slow the movement of caribou predators.

“While habitat restoration is a tremendous task, it can address and mitigate threats to caribou in the near term,” says Chow-Fraser. 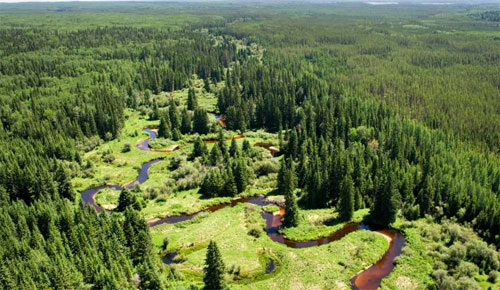 “We have decades of knowledge as scientists, compared to millennia of knowledge held by Indigenous Peoples,” he says. “They knew where the caribou would travel at certain times, and where their habitats were. This traditional knowledge is vital for current and future restoration plans.”

“The window to protect caribou is open only so long,” says Ryan Abel from Fort McKay First Nation. “We are proud to be part of these habitat restoration efforts.”

At CPAWS Northern Alberta, Chow-Fraser agrees that a diverse group that includes industry and Indigenous communities is essential to the path forward toward sustainability. “These are the beginnings of tough but imperative discussions that are led, importantly, by Indigenous Peoples of the region,” she says.

So, while the Species at Risk Act laid the foundation for change two decades ago, it is today’s collaborative efforts like this one – built off expectations created by the FSC Standard – that will make a meaningful, lasting difference in caribou conservation.

And, despite the challenging circumstances, these unified efforts will help make this important species – a bellwether of healthy forests – a more robust presence in northern Alberta, and hopefully, whose sightings are no longer distant memories handed down to the next generation. 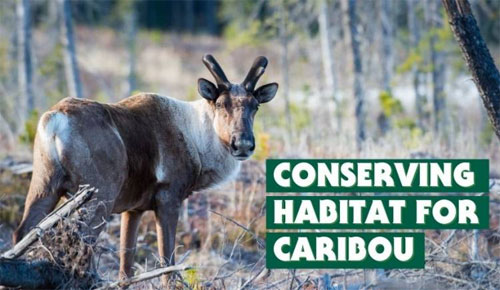