A study led by VTT was conducted in 2019–2022 and studied the economic impact of carbon sinks and bio-based carbon pricing on forestry and the profitability of more carbon-efficient solutions than those used today.

Comprehensive pricing of bio-based carbon and carbon sinks would lead to an increase in carbon sinks, but it would probably have dramatic effects on the Finnish timber market. Still, pricing would motivate the introduction of new technologies that improve carbon efficiency in the forest industry.

If forest owners were to receive a compensation corresponding to the emission allowance fee for growing trees, it would have a huge impact on both the income from forests and the timber market. With the current emission allowance prices, the income from forests would double or even triple. If CO2 emitters, in this case the forest and energy industry, had to pay an amount of money corresponding to the volume of emissions they make, the impact on the timber market would be radical. The industry's solvency for raw material could even turn negative, i.e., the pulp and energy industry could no longer afford paying for pulpwood or energy wood. This in turn would make the supply of domestic timber collapse. On the other hand, certain technological solutions, such as lignin separation and biomass drying, would become much more profitable than before. The compensation model examined would likely increase carbon sinks, but as such it would have dramatic impacts on the operation  of the forest industry in particular.

The forests and forestry play a significant role in mitigating climate change. However, according to the current practice, no compensation is paid to forest owners for carbon sequestration, and, correspondingly, an operator that causes bio-based CO2 emissions does not need to pay for its emissions, i.e., bio-based carbon dioxide is assumed to be carbon neutral. The assumption of such carbon neutrality has sparked a lot of debate. The actual carbon flows and, for instance, the time spans related to the bio-based carbon cycle are important with a view to climate change.

During the project, VTT studied a theoretical model in which carbon sequestration would be compensated for to forest owners, and the emitters of wood-based carbon, i.e., usually the industry, would have to pay for their emissions. Thus, the model would also create an incentive equivalent to the reduction of fossil emissions for reducing bio-based emissions and, for example, producing long-term bioproducts. The project examined whether the model would encourage the forest owner to change forest management practices such as thinnings and rotation periods and the industry to increase the production of durable wood products, and invest in technological solutions like hybrid drying of biomass and the reuse of lignin.

The research was founded on the existing information on how CO2 is bound in the forests and released when wood is processed into, for example, pulp or sawn timber. The project did not take a stand on biodiversity, recreational use of forests or carbon sequestration in the soil. The model is completely theoretical, and the intention is not to present it as a future steering instrument. The aim is to understand what kind of changes price steering targeted on bio-based carbon would potentially cause for forest industry actors and how the pricing of bio-based carbon would boost the financial profitability of effective technological solutions to climate change.

Tapio's current Best Practice Guidelines for Sustainable Forest Management were selected as the baseline for the studies. In addition, the research project examined alternative practices in which some of the management measures recommended for commercial forests are left undone, rotation periods are lengthened or forests are fertilised. The study of more carbon-efficient technologies included, among others, the drying of wood chips with solar collectors and heat pumps, and the recovery of lignin at pulp mills. Technically speaking, these solutions could reduce CO2 emissions in Finland alone by millions of tonnes per year, but we lack financial incentives.

Simulation of a spruce and pine stands in Central Finland

The project simulated a situation in which the forest owner would be compensated for carbon bound by the growth of commercial timber (pulpwood and logs) in five-year periods. The study was limited to commercial timber since it was deemed to be less challenging to monitor for the carbon balances in this context if the model were to be implemented in practice. In the model, the forest owner would not have to pay the compensation back after felling, but the fee would be realised only when the CO2 is physically released into the atmosphere.

The carbon compensation would significantly increase the forest owner's income. When trees are grown in accordance with the current Guidelines for Sustainable Forest Management, forest owners' income from carbon sinks would be almost three times as high as income from the sale of timber, if, taking account of the current value of money, the compensation for carbon sequestration were EUR 100 per tonne of CO2 (see diagram). At a lower price level of EUR 40/tonne, the income from carbon sinks and from wood sales would be about the same. The analyses assumed the wood prices to remain unchanged. 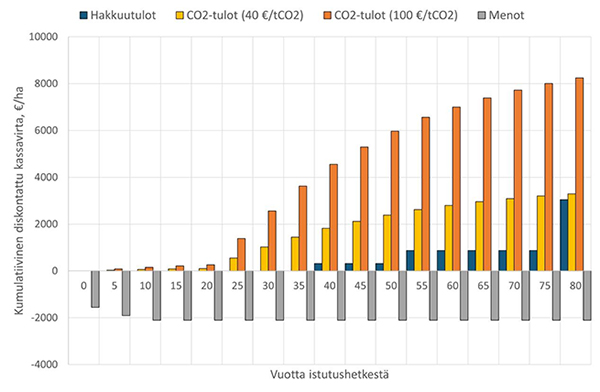 In addition, it was found that commercial forests should continue to be actively managed to maximise the growth of commercial timber and income from timber sales. However, the model would weaken the relative profitability of thinnings, and in many of the price scenarios examined, the one-thinning model proved to be more profitable than the two-thinning model recommended by the current guidelines. It significantly influences the result that the scope of the study was limited to commercial timber. Due to the carbon compensation, it would also be more profitable to fertilise forests than before. A positive financial impact was also observed when the thinnings and final felling were postponed by 5 to 15 years. However, the study did not seek to optimise the rotation period.

The model would be expensive for the pulp industry in particular. The carbon compensation for the growth of trees and reduced thinnings would probably reduce the supply of wood to the market. In addition, high bio-based carbon emissions from chemical pulp production would result in additional annual costs counted in millions of euros for the mills. At the same time, however, the profitability of more carbon-efficient solutions, such as lignin recovery and biomass drying, would improve. For example, the production of biochar and durable wood products could become more profitable. However, using more carbon-efficient solutions also requires that there is demand for the products.

The study found that carbon pricing has a huge impact on the competitiveness of technologies related to the use and exploitation of forests. The complex interdependencies between the forest ecosystem and the forest cluster make the assessment of long-term systemic impacts challenging. Investigating these interdependencies and finding the best solution for both the climate and national economy still require increased knowledge on the subject and a comprehensive multidisciplinary study of the impacts.

The main funding provider of the research project launched in May 2019 was the Regional Council of Central Finland, which funded it with EU regional development funds. Funding was also provided by VTT and the participating companies Metsähallitus, Yara, Valmet Technologies, Hinskala jointly-owned forest, Alva and Silvere. The project ended on 30 November 2022.

For more results of the project, see the project website: www.hiilimetsatalous.fi (in Finnish).