The UPM biorefinery in Finnish Lappeeranta is integrated with their Kaukas mill and has a capacity of 130,000 tonnes biodiesel and naphtha.

A year ago I wrote about the fact that pulp and paper companies in addition to their core businesses are treading new paths outside the traditional. Integration along the pulp and paper value chain has been executed for many decades, in particular by acquiring packaging converters and paper merchants.

The industry’s interest in paper merchants has, however, ceased to exist on the back of the continuously shrinking printing market whereas a fair share of the corrugating business is in the hands of companies producing liner and fluting qualities.

One trend in parts of the industry is that there is an incipient move away from selling only fibre and fibre based material into “selling molecules” in one form or another. The raw material source is still the forest or e.g. residual streams from pulp or saw mills but the end products and customers are quite different. So different in fact that the previous way of integrating forward in well-known value chains is not an obvious choice, in particular as the new product paths are too little known and many theoretically potential acquisition targets are too big to be bought. A fox very seldom swallows a bear.

The pulp industry has been on small parts of the chemical stage before. One historic example was in Sweden during the Second World War when sulphite mills produced ethanol to be used instead of oil, which was of limited supply, as raw material for chemicals. Once the war was over the oil took back its lost ground and as sulphite mills were closed one after the other the chemical scene was left to chemical companies. One exception is of course Borregaard in Norway which with its present product portfolio can be regarded as a chemical company based on wood raw material.

Research on how to utilise the different molecules in wood has been going on for many years but what is interesting today is that big money is spent not only in research but moreover beginning to be invested in full-scale production plants as well as in partnerships with innovation companies. UPM was the first company in the world to build a biorefinery producing biodiesel and naphtha from tall oil. The plant, integrated with their Kaukas mill in Lappeenranta, has a capacity of 130,000 tonnes.

Recently UPM also announced that they will build an industrial scale biorefinery which will convert solid wood into next generation biochemicals. The plant will be located in Leuna in Germany and will produce renewable glycols and lignin to replace fossil-based ingredients in a wide variety of industrial applications. Once operational in 2022, UPM Leuna will have a total capacity of 220,000 tonnes and the whole investment is 550 million euro.

One example of a pulp and paper company seeking a partnership with a company in a totally different business was made public just a few weeks ago. UPM announced that they have made a long-term agreement with INEOS to supply INEOS Köln with UPM BioVerno naphtha produced from tall oil at the refinery in Lappeenranta. INEOS Köln will use this product for bio-attributed polyolefins to be used in a wide range of products from plastic food packaging to pipes. By doing this UPM is established as an actor in a “non-traditional” value chain making good use of by-products from their core business.

In 2017 the former SCA was split into the forest company SCA and the hygiene and health care company Essity. SCA today is the biggest private forest owner in Europe, runs five saw mills, one paper mill, two kraftliner mills and the new big pulp mill SCA Östrand with a capacity of 900,000 tonnes NBSK pulp and 100,000 tonnes CTMP pulp. Based on tall oil, solid biomass and black liquor SCA is actively preparing their entrance on the biofuel market but with opportunities also for other fossil-free products.

In 2018 SCA and the energy company St1 formed a partnership to develop large-scale production of renewable fuels from tall oil. The tall oil will be shipped from SCA’s pulp mills in Munksund, Obbola and Östrand in northern Sweden to Gothenburg where the planned production site will be St1's refinery. The aim of the partnership is to construct a new facility for production of advanced renewable fuels from tall oil with a capacity of 100,000 tonnes per annum. Construction of the new facility, subject to permission process and final approval from both companies, is expected to cost around 500 MSEK to build and is planned to be operational in 2021. 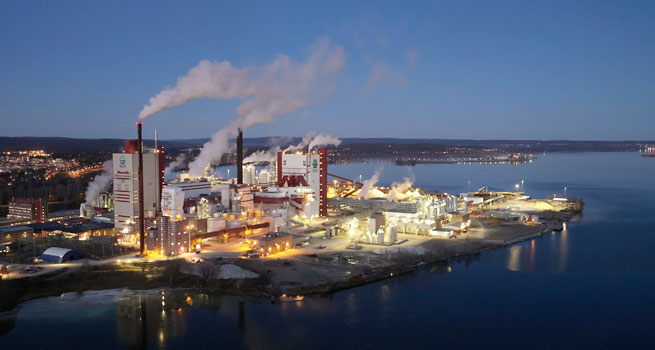 SCA is planning to build a full-scale biorefinery integrated with the big Östrand pulp mill in Sweden.

SCA has since 2014 worked to develop a technology on how to produce biofuels from black liquor and in 2017 a pilot plant was taken into operation at SCA Obbola to verify the method on a larger scale and in continuous production. The outcome has been successful and SCA is planning to build a full-scale biorefinery integrated with the big Östrand pulp mill. The facility is planned to be in operation around the clock and 365 days per year and will have a production capacity of 300,000 tonnes of hydrocarbon when fully operational.

If realised, the biorefinery will comprise two lines, one using solid biomass like sawdust, bark, brash, residual products from forest operations, sawmills and pulp mills and the other line will be using black liquor. The planned biorefinery will be expanded in stages. Firstly, line 1 will be built and begin operating and thereafter line 2 will be built to complete the facility.

Important to stress is that no decision has been taken when construction will begin as it depends on the laws and conditions that will be applied to biofuels over the next years. The environmental permit application has recently been submitted to the Land and Environmental Court.

The production volume in question is equivalent to the fuel consumed by domestic flights within Sweden. The biorefinery will produce renewable hydrocarbons which can be used to manufacture different kinds of vehicle biofuels, chemicals, plastics, dyes, and many other things. The size of a possible investment is not publically known but is probably quite substantial.

SCA and UPM are two examples of companies prepared to invest a lot in biorefining and ”selling molecules” in addition to the businesses of paper and pulp products. As more companies will follow, a critical mass of forest industry companies being partners or molecule suppliers to energy and chemical industry companies will be formed, creating a gradually stronger move towards more non-traditional products based on renewable resources.