The colour green is associated with many things, including jealousy and inexperience. But for most of us the first association is probably “natural”. This is the idea behind “green chemistry”, which is a concept that has first developed about thirty years ago.

It was first developed in the U.S. as a response to the Pollution Prevention Act of 1990, which declared that pollution should be eliminated by improved design instead of by treatment and disposal. Several years of discussion in the international research community then led to the publishing of “The 12 principles of green chemistry” in 1998.

Without going into details, green chemistry basically improves on the efficiency, safety, sustainable sourcing and biodegradability of chemicals. So, for example, an ideal chemical additive to a process would be very effective at doing its job without any unwanted side-effects, would be non-toxic and safe to handle, would not be derived from fossil fuels or rare minerals and would decompose to benign products after use.

We’re all familiar with some of the early successes, such as moving away from oil-based paints containing lead-based pigments towards water-based latex paints. What are some examples of successes and opportunities in the pulp and paper industry?

While these examples are all laudable, the progress of green chemistry is a good news, bad news story. The bad news is that mainstream chemical businesses have not yet fully embraced the green chemistry concept. According to the American Chemical Society, more than 98% of all organic chemicals are still derived from petroleum.

The good news, according to an article in the Harvard Business Review last year, is that half of the growth that took place between 2013 and 2018 in consumer packaged goods came from products marketed as sustainable, and they grew 5.6 times faster than those that were not.

Now that sounds like a great opportunity for the pulp and paper industry! 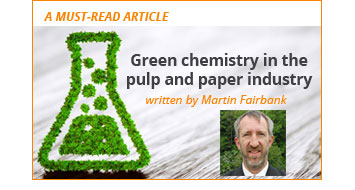