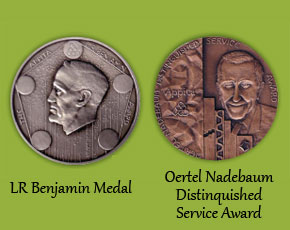 The Appita L R Benjamin Medal honours the late Louis Reginald Benjamin, CBE, a pioneer and leader in the development of the pulp and paper industry based on Australian eucalypts. It is an award designed to encourage technical excellence, innovation and achievement. The medal is available annually to be awarded to persons who have contributed in an outstanding way to the technical progress of the pulp and paper industry in Australia and New Zealand. The contribution is largely personal, and could be in research, development, engineering or management (provided the work managed was technical in nature). The nominee need not be a member of Appita. The Award is in the form of a mounted silver medallion. 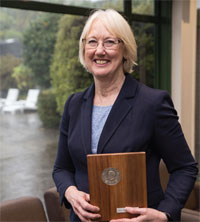 Dr Karen StackDr Karen Stack joined Australian Newsprint Mills as a Process Chemist in 1981, having completed a BSc (Hons) at Sydney University. She worked in several technical roles at ANM Ltd until 1987, after which she undertook studies towards a PhD at the University of Tasmania, publishing her thesis 'PEO and PFR Retention Aid System' in 1992. From 1993 she took on a role as Research Fellow and Lecturer in the Pulp and Paper Research group at the University of Tasmania, where she has contributed extensively to applied research relevant to the paper industry until the present.

During her career Karen has published over 41 peer reviewed papers, 37 conference papers and 29 other reports across areas including Retention Aids/ Wet End Chemistry, Deinking, Bleaching, Wastewater Treatment and Wood Extractives/Pitch Deposition. Dr Stack's early work verified the fundamental mechanism behind the use of a two-part retention aid system, and this formed the basis for the successful application of this retention aid system at ANM's Albury mill. It was used for the first 10 years or so of production of newsprint based on thermomechanical pulp made from extractive rich Pinus radiata.

Control of notorious pitch deposits was readily accomplished during this phase of the mill's operation. Dr Stack then supervised research into optimisation of chemicals used in the deinking process, introduced to ANM's Albury in the early 1990's, publishing several papers in this area, and forming the basis for effective deinking in the mill context.

The introduction of recycled fibre into the Albury mill pulp furnish in the early 1990's destabilised the then satisfactory control of pitch by the two-component retention system, triggering investigations spanning two decades into wood extractive colloids and their management to control pitch deposits at the Albury mill, where both virgin and recycled fibre was used, and the other two newsprint mills at Boyer in Australia and Kawerau in New Zealand. Over this period Dr Stack and the University of Tasmania Pulp

and Paper Research Group undertook several projects, funded largely by several Australian Research Council grants, to understand and resolve pitch deposition problems. Dr Stack combined her practical experience working in a paper mill with her knowledge of colloid chemistry to develop and recommend clear management practices that have resulted in wood extractive derived pitch deposits being largely eliminated at all Australia and New Zealand newsprint mills. More than half of Dr Stack's publications have been in the area of pitch control.

Dr Stack has supervised many Honours, Masters and PhD students in over the last 25 years, and has trained and developed many scientists who have subsequently worked across both chemical suppliers and pulp and paper mills. She has also been heavily involved in Appita Local Section Activities, and through her efforts enabled the sharing of knowledge and development of skills within the local industry. Her contributions to the industry have been recognised through several awards, including the Huyck award for best technical paper in papermaking (1984 Appita conference), Oertal Naudebaum Distinguished Service award (2002), Jasper Mardon award for significant contribution to the science and technology of papermaking (2005 & 2012), and the Ken Maddern award for the best technical paper in the Appita Journal (2012). Dr Stack was elected a Fellow of Appita in 2010 and she currently serves as Editor of the peer reviewed Appita Journal.

Dr Stack has made significant contributions through many publications, supervised many applied research projects, served Appita through involvement in its committees, conferences and publications, and contributed to the development of practitioners working in our industry. Paying tribute to her family and colleagues on receiving the LR Benjamin Medal, Dr Stack said " It is through the opportunities to present the research both as conference presentations and publications and the networking opportunities that arise at conferences that I have been able to discuss new ideas and establish collaboration which has enriched the research. Attending courses such as pulping and papermaking fundamentals and wet end chemistry were so invaluable in my early years. Working with the local section has helped me to feel connected to the mill and the industry and now as Peer Review EditorI can use all the skills I have gained through my career to keep the Journal going and give back to this wonderful industry. So, thank you."

The Oertel Nadebaum Distinguished Service Award honours the late Oertel Nadebaum, who gave outstanding service to Appita for more than two decades. It is designed to provide recognition to Appita members who have made substantial non-technical contributions to Appita over a period of years. A member under consideration for the award should have been active in Appita for at least 10 years. 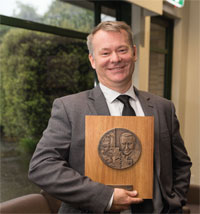 Paul RobilliardThe 2018 Oertel Nadebaum Distinguished Service Award was presented to Mr Paul Robilliard. Paul Robilliard was recognised for the support and service he has given to Appita and to the industry. Paul graduated from the University of Victoria, British Columbia, Canada with a Batchelor of Science (Biochemistry). He moved to New Zealand in 2008 to take up the role of Senior Process Engineer with Beca AMEC and fairly soon after his arrival he joined Appita, bringing with him over 20 years' experience in pulp and paper and the industrial chemical industries.

Paul has made a substantial contribution to the advancement of Appita through his service as a member since 2009, serving both at a local and national level.

Paul joined the Appita New Zealand Section Committee in 2009, and is still currently a member of that committee, holding various positions as Secretary, Vice Chairman and Chairman.

In 2014 Paul took over as one of the organisers and presenters of the annual NZ ABC of Pulp and Paper Course. He has continually worked to improve this course, which has now become one of the most popular courses in the NZ industry.

As a judge of the NZ section New Speaker Competition he has supported and vigorously encouraged young engineers and scientists to participate in Appita events.

Paul has served on the Appita Executive Committee from 2013 to 2018, taking on the role as President in 2015 for a two-year term, providing leadership and direction in a period were the association was establishing new strategic priorities to better meet the needs of its members.

Pauls passion and commitment to advance the industry is demonstrated through his involvement in Appita. His willingness to support and assist the association over the past 10 years has been outstanding.

Adele Elice-Invaso, Executive Director of Appita thanked Paul for his continued support, guidance and contribution and for vigorously encouraging others to also contribute to Appita activities, committees and conferences.

Acknowledging the role Appita played in supporting his professional development and transition to the NZ pulp and paper industry Paul said "I've had many roles within Appita and I have enjoyed every one of them. One of the reasons it's been so enjoyable, is working with others that are as passionate about the industry as I am. Past and current members of the Executive Committee and the various Section Committees, work tirelessly to provide our industry with technical support, short courses, conferences and networking events for the industry. All this on a shoe-string budget and mainly on their own time. I'd like to personally thank each and every one of you that has supported me in being a part of our technical association. It has been an honour to serve our Industry through Appita and I hope to continue to do so for another decade."

Congratulation to Padriac Guiney
The Best Mill Paper Prize,sponsored by ABB and Imerys, was awarded to the best paper presented at the 2018 Appita Conference, by a person working in a pulp and/or paper mill. It is based on technical content, quality of oral presentation, and audience interest. Valued at AUD 2,000, the prize is to be used for professional development. This year's Best Mill Paper Prize went to Padriac Guiney. Padriac presented on "Improving operational awareness with PI dashboard.

Congratulation to Sarah Ruddell
The New Speakers Contest, sponsored by the Manildra Group, is awarded to a person who is giving their first conference presentation. It is based on weighted criteria including quality of oral presentation, quality of audio visual aids, technical content, ability to answer questions and audience interest. Valued at AUD 2,000, the prize is to be used for professional development. This year's New Speakers Prize went to Sarah Ruddell, Process Engineer at Beca AMEC, New Zealand. Sarah presented on "Phase transitions in thermally sprayed chromiumcarbide coatings.