Carbon claims can sometimes be misleading (e.g., carbon offsetting investments which are still tied to fossil fuels) and Rolland is on a journey to reduce its carbon footprint, in its own way.

Carbon negative, carbon neutral, net zero; in the quest for a healthier planet, such terms are often confused. To better understand the climate conversation, it’s important to become familiar with the jargon, and understand the distinctions between different green efforts.

Carbon metrics became prominent following the 1997 Kyoto Protocol, when established market-based mechanisms to encourage companies and countries to reduce their emissions arose. Greenhouse gas reductions were deemed a new commodity. Emissions-reduction projects were incentivized, and earned credits that could be measured, tracked and traded.

“Zero emissions” implies that a process in place is preventing CO2 emissions from being released at all.

“Carbon negative” means that a process is sequestering more CO2 than is being emitted.

“Carbon offsets” describe the method by which a company counterbalances the CO2 it releases. After the CO2 is calculated as a cost to the environment, the company can offset the cost by investing in outside environmental projects – as long as they reduce greenhouse gases by the same amount, or more than the company released.

“Net zero” describes the overarching, global goal established by the 2015 Paris Agreement, which aims to limit the rise in global temperatures below 1.5°C. To meet this target, global carbon emissions will need to level out – or net “zero” by 2050. Many governments have this target in their sights.

Because every industry is different and every business has its own method of operations, carbon offsets are measured using a variety of methods.

Increasingly, businesses are becoming aware of the greenhouse gases (CO2) they emit, and most look for ways to reduce or offset these emissions. These can be direct CO2 emissions, indirect (like the use of purchased electricity to run an operation) or supply chain emissions from activities like shipping and travel.

Some businesses choose to purchase carbon credits instead of addressing carbon emissions at the source. For instance, rather than increase efficiency or aim to use the least amount of energy and materials in their day-to-day operations, some companies simply purchase carbon offsets.

Using recycled paper in manufacturing is an impactful addition to climate change solutions. In order to make effective change, businesses need to work toward a long-term, goal-oriented sustainability plan with science-based targets that reduce and eventually eliminate natural resource depletion.

Rolland’s sustainability plan includes taking a broad view by contributing to social and environmental initiatives and promoting a circular economy. This plan includes keeping waste out of landfills and toxins out of the air, using only what the company needs as efficiently as they can. It also means supporting the people and communities that contribute to Rolland’s success – as well as working towards closing the loop on fiber recovery and sourcing on a global level.

That said, Rolland doesn’t pretend to be carbon neutral. A long-term sustainability strategy is a priority, a strategy that defines success not only by the quality of products but by the effect those products and processes have on wildlife, people and the planet.

Rolland is one company on a mission to reduce its carbon footprint and here’s how they’re doing it. It starts with measuring the impact of everything they do.

A unique and important component of Rolland’s sustainability strategy is its use of biogas; a renewable energy that reduces CO2 emissions by 70, 000 tons annually. Thanks to its utilization of biogas Rolland Enviro® paper has less environmental impact compared to the North American industry average for uncoated virgin papers.

The energy sources used to manufacture Rolland’s papers, which are biogas and hydroelectricity help to greatly reduce the impact on climate change. 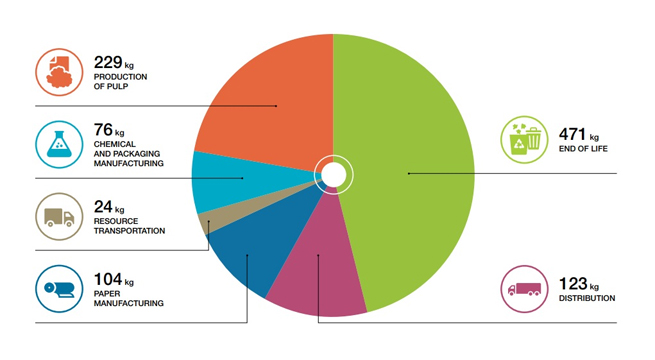 Rolland sets actionable objectives for the future because in order to have real and lasting impact on climate change it’s about the journey and not a single destination. 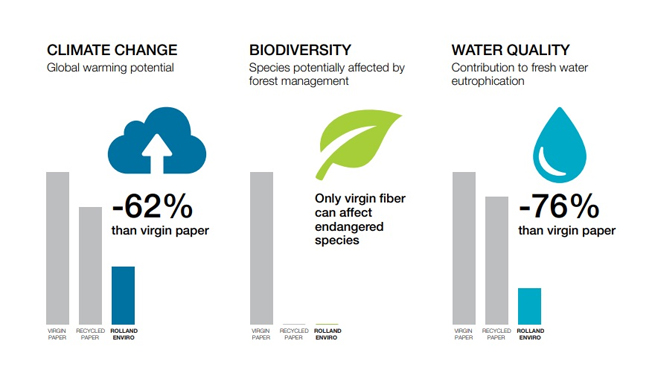 With the recent awareness around carbon neutrality Rolland’s initiatives to combat climate change in conjunction with its transparency make them a trusted option in the search for a partner to help you meet your businesses environmental objectives.