Construction of UPM’s deep-water pulp terminal in the Port of Montevideo is halfway to completion and is on schedule. We look at the work involved in one of Uruguay’s largest-ever infrastructure investments and how it will boost the country’s economy.

The Port of Montevideo in the Uruguayan capital is the site of UPM’s deep-water pulp terminal, which has been under construction since August 2019. The USD 280 million investment will become a terminal with the capacity to handle around 2 million tonnes of pulp shipped to global markets by approximately 100 vessels annually.

The pulp terminal and development of the port play a fundamental role in the logistics of the UPM Paso de los Toros pulp mill, currently under construction in central Uruguay. The mill, scheduled to start up in the second half of 2022, will have a direct railway connection to the port terminal.

Operations in the pulp terminal will significantly increase exports from the port of Montevideo. In addition, the entry of a new railway line to the port will allow the growth of commercial activity for other areas.

As one of the major ports on the East Coast of South America, it plays a key role in the country’s economy and is a vital gateway to the landlocked countries of Paraguay and Bolivia, as well as parts of Brazil and Argentina. 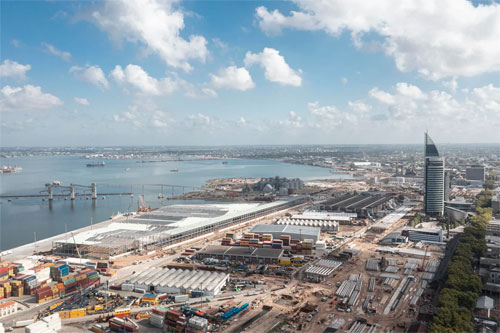 The new terminal is scheduled to be completed in 2022. Photo: UPM

“The pulp terminal construction project will be completed for commissioning on time and on budget in the first half of next year,” says Jorge Kliche, the Uruguay-born Technical Manager of the port works.

While the coronavirus situation has been a challenge, Kliche notes that work has not stopped except for a week-long government-mandated nationwide shutdown. He emphasises that there has never before been a job of this scale or one running on such a tight schedule in the country.

As well as the dredging of a new dock, UPM is overseeing the construction of a six-hectare warehouse for stockpiling goods and direct port access for the railway that connects to the pulp mill being built inland at Paso de los Toros.

“We have 500 workers and about 20 supervisors, one of whom worked with me 15 years ago on the Fray Bentos pulp mill. In a way, that was much more challenging because it was the first time my generation worked with so many people. We didn’t know how to organise, put safety first or make a schedule,” he recalls, adding that the synergy on the current project is great.

From safety and scheduling to the environment, Kliche says that UPM has been extremely meticulous in all areas. “There was an in-depth environmental study regarding the impact of what we dredged and backfilled, as well as a survey into the operation itself. The levels that UPM demands are substantially higher than we normally see in Uruguay,” he states. 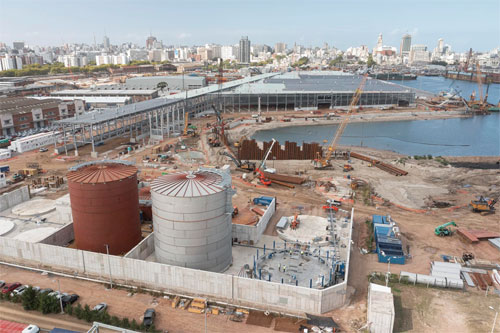 The Uruguayan capital is a crucial logistical hub in South America. Photo: UPM

Hinge between South America and the world

Once the project is completed in 2022, the Port of Montevideo will be once again reconnected to the railway, further cementing Montevideo’s position as a key South American hub on the Atlantic coast and in the River Plate area.

“Analysis of container moves shows Uruguay is already a hub, with 50% of containers not originating from within the country. In a year, Montevideo moves about 800,000 TEUs (Twenty-foot Equivalent Units) and Buenos Aires maybe 1.8 TEUs. While that is over twice the difference, consider that Argentina’s population is 13 times bigger,” says Fernando Puntigliano, who was head of the National Port Administration (ANP) between 2005 and 2009 and is currently a professor of Logistics and Supply Chain Management at the School of Business of the Universidad Católica del Uruguay.

Puntigliano notes that some ports are wholly dedicated to transhipment, but it is not a role he envisions for Montevideo. “There must be a balance between import/export and other hub cargo, because transhipping is very volatile. To have Uruguay as only a transhipment country is risky,” he warns. 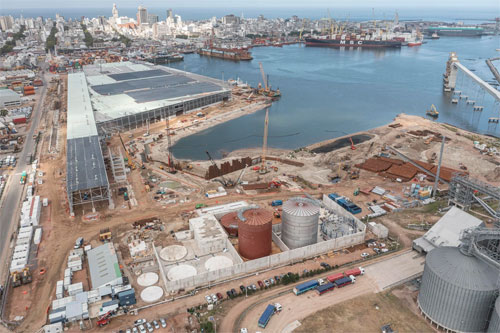 The new port project will reach far beyond the city’s shoreline. Photo: UPM

A diverse port helps everybody

Port activity has been slowly expanding over the years, with the main growth being seen in container movement. However, Guillermo Mera, a freelance logistics adviser, notes that transit cargo is often reliant on political decisions and neighbouring countries, so any project that means the port isn’t dependent on third parties transhipping cargo is more than welcome.

“The overall consensus here is that a diversified port will bring economic wealth, which in turn offers well-being for everyone. In addition, specialised terminals don't tend to bother anybody else, but the arrival of more actors does increase pressure to improve the draught and port services,” explains Mera, who has over 30 years of experience working with logistics and port activities.

While the industrial and railroad elements of UPM’s project have received most attention, Mera believes that the port terminal development deserves far more consideration. He has been impressed by how quickly and smoothly construction has progressed at what was once a “forgotten little rundown corner.”

Alongside the state-funded railway development, the Uruguayan government has been inspired to invest in an elevated highway around the port. It will not only improve both access to the port and capital once complete, but Mera adds that the initiative also opens up the possibility of backland development.

“The project is significant. It will have an impact in the port and an impact on the city of Montevideo. With the railway coming in as well, it will open new logistic opportunities for everyone. The main point of this project is industrial development. If there is no industry, then there’s nothing at all,” concludes Mera.