In the last article we looked at optimization strategies for the energy consumption on a Yankee Dryer system, particularily the natural gas consumption in the Yankee Hood versus the steam in the Yankee cylinder.

This time around if we focus on the Yankee hood alone the total energy consumption can be attributed to two main factors:

In the latter case the process air system can be comprised of as many as five (5) fans as seen in dual burner systems, which are most common, i.e. a Wet End burner system and a Dry End burner system. These five fans, in turn, as comprised of two supply fans (one for each wet and dry end systems), two combustion blowers and the main exhaust fan.

As we saw in the previous article we can optimize the operation of the Yankee dryer hood by maximizing the absolute humidity of its exhaust flow in a range between 0.5 to 0.6 lb DA / lb H2O (or 0.5 to 0.6 kg DA / kg H2O).

In so doing, the exhaust flow takes on increased humidity loading, effectively making it "work harder". In this case we reduce the volume of exhaust required. And less exhaust also means less make-up air, which reduces the electrical requirement on the supply fan.

The biggest benefit of raising the hood supply air temperature, though, is the lower nozzle jet velocity requirement. Convective heat transfer, which is the heat transfer phenomenon exhibited at the dryer hood, is mainly governed by both air temperature and air velocity.

Therefore if air temperature is raised we can compensate by lowering air jet velocity out of the nozzles to meet the same heat load. In conclusion, lower air velocity means lower air volume required at the hood and therefore lower electrical load at the supply fans.

Finally, as secondary effect, if hood supply air temperature is raised, the same volume of supply air volume required can be met with a smaller mass of air (since air occupies a larger volume as its temperature increases) and electrical requirement at the supply fans reduces further.

On the other hand, to reach this higher supply temperature the burners will consume more gas and the question arises: is the increase in gas cost counter-balanced by the savings in electrical cost?

We propose to show that the sum of the two energy consumptions does in fact produce a net reduction in overall energy cost as we raise supply air temperature to the Yankee dryer hood.

To illustrate this point we conduct a study looking at a range of hood operating temperatures between 650 and 1300°F (350 - 700°C) to determine how each individual energy cost behaves over this range.

We used the following energy costs in our study as averaged in the eastern US:

In this study we considered a double width machine with 18 foot (5500mm) diameter Yankee cylinder. A Towel grade was used in this study with the following properties and conditions:

Following our calculations the following results were obtained with energy cost plotted on the y-axis $/year while hood supply temperature plotted on the x-axis: 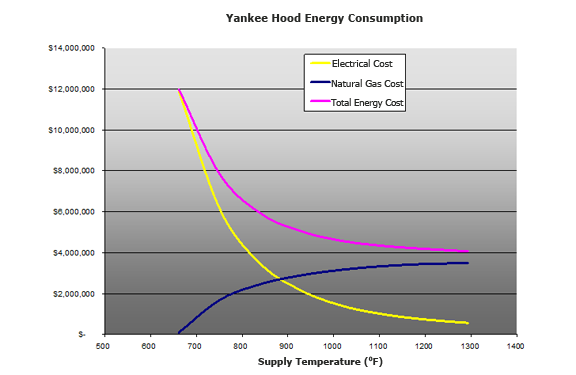 The yellow curve shows the behaviour of fan power costs which can be quite astromnomical, and thus not feasible, at very low temperatures if we want to meet the machine speeds stated above (obviously any machine with such low temperature capacity will not be attempting to run this high a production rate, but will simply run slower).

As temperature increases therefore electrical cost drops almost exponentially to about 3.0 MM$ per year for a standard hood and further to 1.0 MM$ for a high-temperature hood.

Conversely the burner gas consumption increases with temperature, as seen by the blue curve, also to about 2.5 MM$ for a standard hood but levels off at 3.5 MM$ for a high-temperature hood.

The sum of both consumptions is shown by the pink curve which indicates a total just over the 5.0 MM$ mark for a standard hood but keeps dropping to the 4.0 MM$ mark for a high-temperature hood. In conclusion, the higher the operating temperature the lower the production costs at the Yankee dryer system.

We also see that a maximum 1 MM$ in yearly savings is possible in converting to a high-performance, high-temperature hood. With the cost of such a hood in roughly the same range, a potential 1 to 2 year ROI is realistic in such a rebuild.

Of course, these savings completely depend on the local energy costs. Our analysis considered electrical and gas costs averaged in the eastern US. Should electrical power be less a net savings might not result. In these cases the main driver of changing to a high-temperature, high-performance hood is simply the added capacity in order to significanly increase production.