In order to reduce energy costs a recent wave of interest in papermill heat recovery has been to generate steam by reboiling condensate in newly developed heat exchanger systems instead of typically sending it back to the boiler room.

Due to the relatively higher cost of producing steam the return on investment on this type of heat recovery known as "Steam Generators" or "Reboilers" is even more interesting than traditional air/air heat recovery systems which only displace gas consumption, as previously discussed in this column.

The average cost to generate steam can vary from mill to mill depending on various factors such as boiler efficiency and has been between $10 and $12 for one thousand pounds of steam per hour (lb/h). By recovering, or "generating", even 2000 lb/h of steam an appreciable savings of 480 $/day can be obtained or $168,000 over the course of a year. At 4000 lb/h of steam the resulting savings is therefore upwards of 336,000 $/year.

The return on investment, or "ROI", can be anywhere from 1 to 3 years depending on the required steam pressure. Of course for the same heat source available the higher the steam pressure required, the lower the steam flow produced.

The benefit of producing higher pressure steam is the ability to feed it back to the mill's main steam line which feeds a larger number of applications throughout the mill and in a continuous manner. On the other hand lower steam pressure output yields a larger volume flow of steam yet is relatively limited in the number of applications which are not necessarily in continuous use yearround (such as building make-up air heating for example).

The basic idea is to reheat, or in this case "reboil", the condensate produced in the mill's process using exhaust process air coming from the paper machine. The highest quality energy sources are the exhaust streams from tissue machines since the Yankee hood exhaust temperature can range anywhere from 260° to 370°C (500° to 700°F). In some cases even exhaust flue gas from the turbine of a Cogen plant can be used (intead of sending to a HRSG, for example).

Condensate which would otherwise be sent back to the boiler is deviated off to a Steam Generator. The main advantage of one such soon-to-be-patented Steam Generator is the simplicity of use. The main difference between a steam generator and a boiler is that the latter is a very high pressure vessel which requires continuous monitoring and supervision; i.e. a boiler operator is assigned to the task. A steam generator, on the other hand, is a heat exchanger and as such does not need continuous supervision or a specially assigned operator. 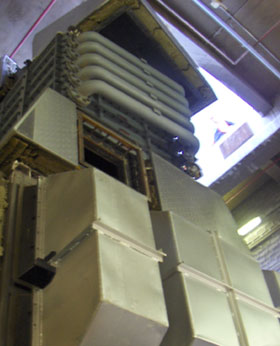 Steam Generation UnitThe steam generated, if high enough in pressure, can then be used at the motive side of a thermocompressor. As such the benefit is uninterrupted year-round use thus maximizing the annual savings. This type of steam pressure requirement can typically be in the area of 12 to 15 bar (175 to 225 psig) and so the accompanying heat source (hood exhaust) to generate such steam should preferably be above 315°C (600°F) in order to avoid high equipment cost and a long ROI period.

Therefore two potential scenarios render such a project viable for a mill. The first case is a very high temperature heat source of over 315°C (600°F) in order to generate a high steam pressure. Or, in the second case, if this grade of energy is not available then lower pressure steam can be generated but at least larger steam flows can be obtained.

The first case is exemplified by processes yielding high exhaust air temperatures such as off tissue machine Yankee hoods (as described above) and can profit most from rapid ROI payback. The higher the temperature available from the heat source, the higher the pressure of the generated steam and the shorter the ROI period.

The second case, exemplified by low demand heat sinks, would be steam applications requiring 3 to 5 bar (45 to 75 psig) such as building make-up air units, steam boxes or as direct injection to pulpers or in the deinking process.

In many exisitng heat recovery systems the heat source is already being used on heat exchangers requiring the high grade heat first, followed of course by the progressively lower grade heat requiring units. Yet since the steam generator only uses the sensible portion of the heat it can be "inserted" into the exhaust stream just before the exisiting systems without too much impact on subsequent heat recovery units, especially if the existing units only employ the near-latent or fully latent portion of the stream's energy (for example building make-up air heating or water heating towers respectively).

Since the steam generator only uses the first, sensible portion of the exhaust stream's available energy it does not affect the dewpoint temperature and absolute humidity thus leaving the subsequent latent portion of the energy untouched and still available for the following stages of latent heat recovery.

The slight loss of heat recovery taken on the mill's exisitng heat recovery system is greatly outweighed by the gain taken at the Steam Generator. Since the cost of steam outweighs the cost of gas the above approach still shows a significant net payoff as can be seen in the case example below.

In one mill studied the tissue machine's Yankee hood exhaust was being used on a first stage air-to-air heat exchanger for combustion and make-up air preheating (before being sent to a gas burner to complete the heating to its final process temperature). The second stage consisted of a water heating tower. By inserting the steam generator first into the sequence then the existing units would therefore become stages 2 and 3 respectively.

In this case the combustion air preheating temperature would drop from 400 to 300°F (200 to 150°C) and so the energy recovered would drop from 1.1 to 0.8 MM BTU/h. The water heating tower outlet temperature would only drop by a few degrees since the sensible heat removed beforehand hardly affects the quality of the latent heat left over for the water tower (only dropping the wet bulb temperature by 2 or 3 degrees but the dewpoint temperature and absolute humidity remain unchanged) and it's energy recovery would only drop from 3.0 to 2.8 MM BTU/h.

And so a total of 0.5 MM BTU/h would be lost in these two stages yet a gain of 3.0 MMBTU/h would be possible with the steam generator. Therefore the net gain in this system would be 2.5 MMBTU/h of steam production cost (as opposed to gas cost alone) or approximately 2500 lb/h of steam.