There are many answers to this question: like money, state-of-art equipment and investors. However there is also another answer; Enthusiasts! Not least when it comes to treading non-traditional routes like biorefinery development. Today the need to turn more molecules from the tree into other products than the traditional ones, is top of the agenda for many pulp and paper companies. Until recently, this was not the case when companies like Domsjö in Sweden and Borregaard in Norway were regarded as rather odd ones.

The Domsjö development area, just outside Örnsköldsvik in northern Sweden, is a very good example of the importance of enthusiasts and what has been achieved over the last fifteen years. For more than a century, MoDo was the region's dominating forest industry. Over the years products like sulphite and sulphate pulps, fine paper, sawn timber, wood yard equipment, prefabricated family houses, porous board, chemicals and ethanol have been produced. The production of sulphite paper and dissolving pulps, ethanol and chemicals, as well as a strong R&D department, were located in the same industrial area with the sulphite mill being the engine providing heat, water and effluent treatment for the whole area. 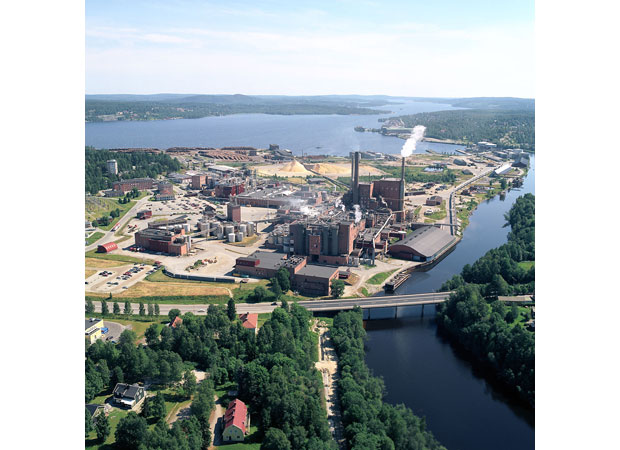 Domsjö development area in northern Sweden
During World War II a chemical industry, based on ethanol from the Domsjö sulphite mill, emerged and gave birth to an important part of the Swedish chemical industry. When cheap oil became available after the war most of the products from Domsjö were no longer competitive and the company's chemical activities were relocated to the Swedish west coast and based on oil. The company strategy later changed from diversification to concentration on pulp and fine paper, whereas non-supporting activities, like the chemical business, were gradually sold off.

A pulp mill with nine lives

Although Do in MoDo is short for Domsjö, a number of attempts were made to close the mill. But like the cat, the mill had a number of lives up the sleeve too. When the last effort by the MoDo management to close down Domsjö failed, a group of six enthusiasts and investors bought the mill on December 31 1999. As one of them said later; "MoDo sold a pulp mill but we bought a biorefinery." That was the turning point for this area releasing, not only product ideas and investments turning the sulphite mill into a true biorefinery, but also ideas about cooperation between companies, universities and public sector to form a biorefinery cluster based on wood raw material and industrial residual streams.

In order to develop new ideas, three enthusiasts got the idea that the major companies within the industrial area should form a separate company. After some time the company was named Processum Biorefinery Initiative. To spark the development a true enthusiast and entrepreneur was hired as managing director and he managed to bring companies and universities from northern Sweden into, what has become, a very successful biorefinery cluster.

Biorefinery of the Future

What used to be Domsjö industrial area is therefore today known as Domsjö development area being the hub of the "Biorefinery of the Future" cluster. It involves a range of companies like well-known pulp and paper producers, process consultant companies and equipment suppliers, which in one way or another are connected to the forest industry. Other important cluster members are universities, research institutes and as well as public and private financing organizations.

Keys to the success of the cluster are enthusiasm and co-operation. Companies and universities, Swedish as well as from abroad, cooperate in biorefinery projects aiming at developing new products and processes based on renewable wood raw material as well as on industrial residual streams and waste. All projects must have a couple of different partners and the results are, except where there are patent opportunities, published on the www.processum.se web site. Over the last seven years more than 150 projects have been done and there are some 30 patents approved or pending at the moment.

The bioreactor, one of fifteen biorefinery pilot equipment.
A successful laboratory trial needs to be verified in pilot and demo scales before it can reach the market. To up speed this process, SP Processum has invested in fifteen different pilot equipment in which research projects are taken to pilot scale level. Within the area there is a biorefinery demonstration plant simulating a real industrial process situation which means that Domsjö Development Area can, in cooperation with a wide range of partners, take promising biorefinery areas right from laboratory scale via pilots to near industrial conditions.

Just to give a few examples of promising projects: A method has been developed to produce single cell protein from an industrial residual stream, protein that has been mixed in fish feed and successfully tried on fish. The result was that they actually grow faster with this fish feed than with their normal one. This project was one out of three European research projects which were awarded EARTO Awards last year. EARTO is the organization for European research institutes. Green liquor sludge has been a waste problem for pulp mills, but now a method has been developed to seal mine waste with a mix of green liquor sludge and moraine and suddenly a problem is turned into an opportunity. 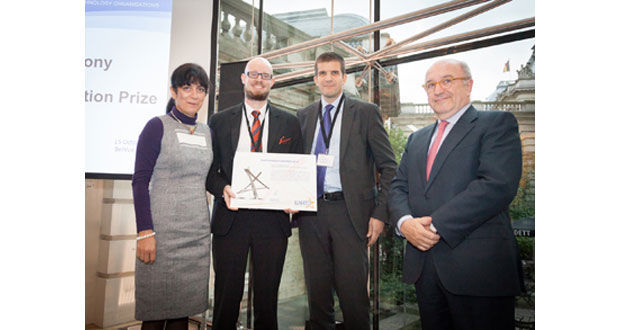 The EARTO Award reception ceremony for the successful single cell project.
The sulphate process results in stripper gas, which mostly consists of methanol, ammonia and a number of organic sulphur compounds. A project aiming at finding a method which removes unwanted compounds from the methanol was run and the result is a patented method, based on oxidation and distilling. A pilot plant will now be built at a Swedish sulphate mill. One last example of cluster projects is "Locally produced plastic" examining the feasibility of building a European industry, where the forestry biomass is collected and converted into bio-based plastic products, such as supermarket carrier bags or caps for milk cartons.

Thanks to enthusiasts and foresighted investors with courage SP Processum with national and international partners, as well as companies within the Domsjö development area, is today a very viable hub for extensive biorefinery development. Without the visionary enthusiasts fifteen years ago, as well as enthusiasts during the build-up and today, the area had been quite and to a large extent closed down. Many of the research ideas and innovations born would maybe have been born elsewhere, or perhaps not at all.