The movie Black Panther uses the premise that a small nation in Africa is well ahead of the rest of the world in developing new technologies.

When I was in Cairo last fall, I saw a papyrus scroll at the Egyptian Museum that was created and written on about 5000 years ago, which is 3000 years before Ts’ai Lun is said to have invented paper in China, so the Black Panther concept is not so far-fetched!

If you visit the Pyramids of Giza, nearby is the Papyrus Institute, which is well worth a visit by anyone interested in papermaking technology. Although it serves as a bit of a tourist trap by selling artwork on papyrus, with kickbacks likely going back to local guides that bring their clients there, they provide a good demonstration of the production of papyrus sheets by hand.

The reed that provides the raw material for papyrus has the horticultural name Cyperus papyrus and was abundant across the Nile Delta in ancient Egyptian times. It has a triangular stem from which the outer rind is removed, and the pith on the inside is then sliced into strips which are soaked in water to remove the non-cellulosic materials. This was all demonstrated by a chatty employee who showed me how to lay the strips horizontally and vertically on a flat surface to make a papyrus sheet. Like paper, the papyrus sheet is held together by hydrogen bonding of the cellulose and is pressed to consolidate the sheet. He also demonstrated that papyrus sheets have some natural hydrophobicity, and he even showed that ink on papyrus could be washed and rubbed off without disintegrating the sheet. 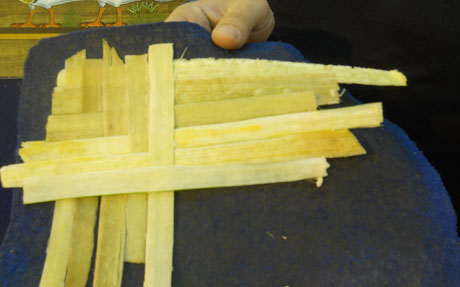 The technology of papyrus has long been displaced by papermaking using a suspension of pulp fibres, and the papyrus plant actually became extinct in Egypt. It was reintroduced into the country in 1872, primarily for the tourism market.

I am now the proud owner of a souvenir from the Papyrus Institute, illustrated colourfully with a depiction of two symbols of ancient Egypt: on the left, the papyrus plant, symbol of lower Egypt and the Nile Delta, and on the right, the lotus or water lily, symbol of upper Egypt.