B.C.'s forestry industry has learned many valuable lessons over the last decade, from how to deal with the Mountain Pine Beetle, to how to most effectively foster overseas markets.

In a recent interview with CBC, president and CEO of the Council of Forest Industries, Susan Yurkovich enumerated the ways in which these challenges have strengthened the sector.

While the devastation of the Mountain Pine Beetle wreaked havoc on western North American forests, B.C's in particular, the province experienced a bit of an upswing on the back of an increase to its annual allowable cut. B.C. had permission to chop down more trees, in an attempt to speed up the processing of beetle-infested wood. Now that annual cuts have settled back down to their previously-sanctioned levels, the industry and the communities it serves are readjusting, Yurkovich explained. The lessons learned from the epidemic, however, are being put to good use, as the province now attempts to ward off another attach from the B.C. spruce beetle, which is spreading in B.C's north.

"I think people can understand how getting onto a pest infestation early, is something we need to be mindful of," Yurkovich told the CBC. "I think everyone has learned from the Mountain Pine Beetle epidemic that if you don't do that very early action, it can spread very quickly – as pests do." 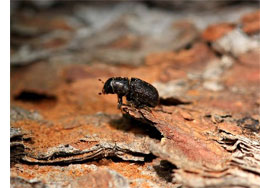 Mountain pine beetle. Photo credit: Jeffry B. MittonWhen it isn't preoccupied with fighting pestilence, the Council is active in working with all levels of government to ensure the industry enjoys access to competitive advantage. Yurkovich told the CBC that while every business faces challenges, the Council benefits from a successful partnership with Natural Resources Canada and the provincial government, who, in collaboration, help open markets for Canadian wood products in Asia. "Now we're really looking for opportunities to move up the value chain, exploring opportunities in India. Those are really important partnerships that the industry benefits from. We absolutely couldn't do those on our own," CBC reported Yurkovich as saying.

Canada's forest industry has also learned a great deal in the aftermath of the softwood lumber dispute, and the Council credits in part its emphasis on market diversification with the lessons learned from that dispute. "One of the things we've learned from the softwood lumber dispute is that being highly dependent on one market, if you're having an issue with that market, it makes it difficult. We still sell a lot of products into the U.S. but we've been successful in finding new markets and we continue to do that around the globe," Yurkovich explained to CBC.